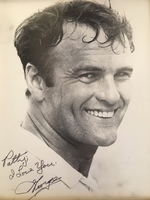 In Memory of George Kitchener Webster

It is with great sorrow that we share the sudden passing of George Kitchener Webster,
beloved Husband, Father, Grandfather, retired Lieutenant Colonel, and accomplished
athlete, who was taken from this world on April 10, 2020 in Weston, Florida.

The first of three children, George grew up in Detroit, Michigan. Early on, he displayed
the work ethic and initiative that would frame his many successes when he built a paper
route large enough to buy his first horse and first car. George earned a football
scholarship to the University of Detroit where he served in the ROTC program, and
graduated with a Bachelor of Science. George played two seasons with the Cleveland
Browns before joining the United States Army as a Lieutenant.

Serving two tours in Vietnam as a Troop Commander, George went on to have a
distinguished twenty year military career, earning numerous meritorious awards
including two Silver stars, four Bronze Stars, four Purple Hearts, three Air Medals, the
Combat and Infantry Badge, and the Ranger tab. Other highlights of his military career
include coaching football at West Point and serving the US Army at both the Pentagon
and NATO (where he also played for the Brussels British Rugby Club).

Retiring from the military, George earned an MBA from Georgia State University, and
worked as President and CEO of two successful companies before establishing his own
consultancy. Riding his horses and competing in reining competitions filled his later
years, winning multiple first place rankings and numerous other awards.

Though, if you had asked him, it was not his accomplishments he was most proud of,
but of his family. It was his 51-year marriage to the love of his life, and their three sons,
that gave him the most joy. From coaching little league soccer teams to carving pine
wood derbies for his kid’s cub scouts, he was the best dad. He was the best husband!
He was always there, supportive of his family.

George is survived by his wife, Patty, and their three sons: Bryon and his wife, Cuifen,
and their children, Sophia and adopted son, Wenhao; Eric and Jenne, and their
daughter, Story Sue; and Shawn and McCall and their children, Penelope and Tristan;
his brother, Wayne Webster, as well as his many nieces, nephews, and cousins; other
special extended family members, and many friends.

We share these things, and can still only hint at the impactful and full life that was George
K. Webster’s. He will be missed, and though he himself would have never claimed it, to
have known him was to know greatness. It is with a heavy heart that we write, he was our
hero and a hero to so many others. He will always be in our hearts.

George will be laid to rest with full military honors at Arlington National Cemetery.

In lieu of flowers, donations can be made to these organizations in his memory: