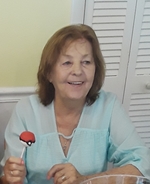 Private services will be held for Georgina Marina DeStefano, who passed away at her home on Sunday, January 17, 2021 in Coral Springs, FL. To her loved ones she was affectionately known as Georgie, Mommy, Nana, and GG.

Georgina was born on January 4 in Newry, Ireland to Owen and Lilly McAteer, as the youngest of 9 siblings. Upon arrival in America she worked for Pan Am airlines where she met the love of her life, James DeStefano. They were married shortly after and enjoyed over 50 years of marriage while residing in New York City, Prattsville, NY and Margate, FL. He preceded her in death on April 3, 2016.

She lived her life as a devoted and loving mother, grandmother and great grandmother. As a devout Catholic woman she taught her family to always have faith in God and pride in their family name. In her spare time she enjoyed art, both as an admirer and artist, and nature- with the ability to find beauty in the smallest things.

Services will be held on February 1, 2021 at 3:00pm at Eden Funeral Services L.L.C. in Pompano Beach, FL. She will be laid to rest on February 2, 2021 at 10:30am with her husband at South Florida National Cemetery in Lake Worth, Florida.