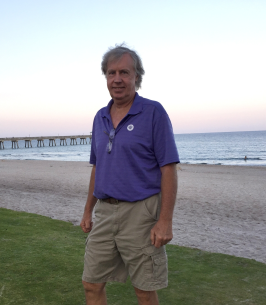 ﻿
Thomas F. Port, age 69, died unexpectedly on January 28, 2022 in his home in Deerfield Beach, Fl. Family and friends are deeply saddened and in shock by his sudden death since he always looked like the picture of health & was often complimented on how he was getter better looking with age. He was a good hearted, loving soul. He was living his life happily with the love of his life and best friend, his wife, Carole & beloved pup, Sugar. He would have been 70 this August and he and his wife, although together for 30 years, were married 2 weeks shy of 25 years. They had reached the contented stage in their marriage, renovating their townhome and making plans to celebrate their milestones…..but fate had other plans.

He is predeceased by his parents, Mary and Edward F. Port. He is survived by his loving wife, Carole, his older sister Arlene Glancy and his niece, Caroline Bragg and two nephews Kevin Glancy & Chris Glancy and their children.

Tom was born on 8/2/1952 in Providence, RI. He grew up in a small town near Greenville, RI. His family also had a beach house in Pt. Judith. Tom always enjoyed the beach and he and his sister often spoke of the fun they had at Pt. Judith & had a lifetime love for RI. Tom had a paper route and was a golf caddy during his teen years. He graduated Smithfield HS in 1970. He pursued higher education attending Bryant University followed by New Hampshire College where he obtained his MBA. After his parents relocated to Fl, Tom also moved shortly thereafter to be there for them as well as enjoy the beach and the wonderful golfing weather. He bought his townhome in 1984 and he continued his successful career as an accountant, remaining there for the rest of his life. Tom wasn’t big on change, was easily contented and liked that he lived near his parents so that he could be there for them. He was especially glad that he was available to his mother after his father passed away. He was a devoted son, checking on his mother twice a day, enjoying the laughter as they shared the same dry sense of humor. He did this throughout her life until she passed at age 90.

He married his current wife & best friend, Carole Miller, on 2/15/1996. Tom loved to tell the story of how his wife was like “a shark, circling the bar, looking around and zoomed in on me and picked me up”. We danced that evening, had laughs, but he left early because he had an early golf game and Carole couldn’t believe that he left her! Lol. But he called the next day and brought her flowers and the rest is history. Despite the ups and downs in a marriage he remained devoted & loving and was the same way with his family and friends.

Tom was a big sports fan, a passionate golfer and a lifetime fan of the Boston Red Sox! He loved playing with his golfing buddies, looking forward to meeting up with his long term buddies as well as playing with his local ones. He also loved hanging out with his “happy hour crew”, one of whom he has known for over 40 years, along with his regular local guys for some good laughs. You could tell the joy and caring they had for each other. Other than his times with his buddies, the rest of the time he spent with his wife. It is not often one gets to call their spouse also their best friend. They did everything together. They both loved their rescue dogs and Tom spoiled them all, wife included. It is that love that will remain forever in our heart and help us carry on. Those that knew him well were honored to have him in their life.

“If love alone could have saved him, he never would have died”. The saving grace is that he did not suffer and that he is now at peace surrounded by light.

Cremation has taken place & his ashes were set free in the ocean he loved. In honor of Tom’s wishes there was no formal memorial service. But that was typical of Tom. Since our family and friends live all over the country, he did not want to inconvenience them. Instead, we have been celebrating his life with others as the opportunity arises. Tom was also not one for big parties, often warning me against making him a surprise party for what would have been his 70th birthday! At least, however, he was able to experience the joy when learning of his wife’s plans to take him to a couple of his favorite golf courses, one new one in LaJolla, Calif. and one of his old time favorites, “Sheny” in RI. He will now go in spirit.

May he Rest In Peace surrounded by the light he has given to so many.

The family requests that those who wish to celebrate his life are encouraged to do so in whatever way they wish. His wife was touched to see a memorial that a friend of his set up. He and his friend met up annually to play golf and it was a tradition that his friend would give Tom a new hat every year. This year he had a Red Sox hat for him and since he could not give it to him this year, shy by only a few days, he set up a little Red Sox memorial for him. Tom also had a love for nature and was concerned about maintaining natural beauty and thus, a tree planted in his name where they are most needed or anywhere one wishes, would also be an honor. As an example of his love for our rescue dogs, he once came home with chicken and his wife said, “Oh how nice you are going to make us chicken for dinner”, to which Tom replied, “Oh no, I bought this cause our dog ran out of chicken and I needed to cook it as part of her dinner tonight” lol. Thus, there have been donations to Humane Society in his name. In fact his wife plans to have a memorial stone with his name imprinted at the Broward Humane Society. The family wishes that in lieu of flowers, if one wishes, they can use above examples or just donate to the charity of their choice if they so choose.


We wish to thank our wonderful family, friends and neighbors who have been so gracious, compassionate and loving during this difficult time. Bless you all.